I am glad that cirrhosis hasn’t had too bad an impact on you. I am not sure how infections affect those of us with cirrhosis, but I believe that we are more susceptible if not compromised. It may also depend on what stage of cirrhosis and what other medical conditions you have.

Unfortunately, the level of cirrhosis I have has an impact on my gall bladder, spleen, portal vein and other things I can’t even remember. More recently, it is having an effect on my kidneys, pancreas and I just had to have esophageal varices banding surgery and they were going to do more in a couple of weeks and on my duodenum too. I had complications with that surgery, so they are looking at other methods of treatment.

I am also glad that you are eligible for the booster already. Don’t forget your flu shot also.

All the best to you on low reactions to the booster,

Paul, I’m so sorry to hear that you have so many medical issues related to your cirrhosis. I’m thinking yours must have progressed quite a bit farther faster, as we’ve both had HBV from birth, but the progression of this disease is so individual and depends on so many factors, including the genotype we have. At least you are getting treatment and informing yourself, which is a powerful tool. I’m convinced that we can do a lot to improve our health with lifestyle adjustments, even when we have serious health issues but it’s not easy. And it’s harder when we’re not feeling well to be hopeful that we’ll get better. But our bodies do have a capacity to heal a lot of things and it’s important that we keep that in mind during the tough times.
My mother was diagnosed with cirrhosis in her early twenties and given an estimate of having only a few years to live. She went on to have 3 kids and will be 95 in December. Amazingly, after 50 years of chronic HBV, she cleared the virus and developed antibodies at age 75, without treatment. Of course we can’t all be that fortunate but you never know…so hang in there! Karin

In 2007, Kaiser gave me 5 years to live. Well, it’s way past 2012 and I am still kicking. However, I did not start treatment till 2017 and I should have started back before 2004 after I was first diagnosed with fibrosis and my numbers were well within the range of needing treatment. Back then, there wasn’t many options other than Interferon. Then, I think it was around 2008 or so, a hepatologist had mentioned barraclude but he ended up retiring before I ever decided to start treatment and then I let it go. My career and fear of treatment and I guess not being educated enough about CHB and antivirals made me wait until I started having worsened medical issues and they diagnosed me with cirrhosis in 2016.

It’s the quality of life issues that I deal with even though I try my best to stay mentally and physically in the game. I do a lot of volunteer work because what they say about “giving is receiving” is so true. When you help other people, often times it does more for you than them. I do have to say that with all the conditions I have, I am still able to do a decent amount. There are times however, that things are harder and I may not post on here for months and other times I may be more actively posting. It’s the daily pain that gets tedious but the random GI flare-ups that are excruciating when I am just pleading to God to help me make it through, that are so rough.

I didn’t have much of a support system and had never even had any interaction with someone else with CHB until I found the hblist which eventually evolved to hepbcommunity. When I first found the hblist and got to read posts from people that had a lot of the same fears, medical issues, life struggles, isolation and had CHB, it was like a lightbulb turned on within my spirit and I felt such less isolation knowing I was not alone. That’s why I have been hoping that those that have cirrhosis would be more outspoken within this community, so that maybe I can find even more commonality with what I am experiencing within this subset.

By the way, your mother sounds incredible and I hope to have even a fraction of that fortitude.

@ThomasTu would you mind explaining how someone’s genotype plays a part with HBV, CHB and cirrhosis?

Virus genotype and how it affects disease progression is something that is still under research. I’ve attached below a table of different outcomes that are associated with each genotype (from the paper I coauthored here: https://www.nature.com/articles/s41575-020-0296-6). We don’t really know what drives these differences (whether it’s the patient themselves, the virus, or a combination of the two), but it’s still a matter of research. 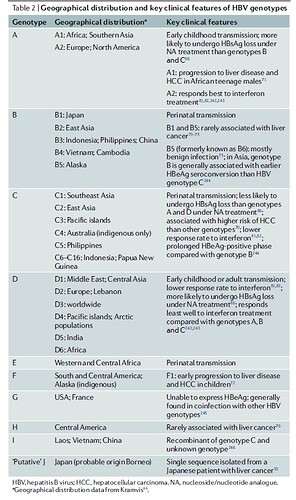 Hi Karin, what an inspiring story about your mother. Wow!! Although I don’t have any expectation that my virus will be cleared since I’m already 62 years old and have been on antivirals for almost 20 years, it’s still really neat to hear a success story!! And to have outlived the prediction that cirrhosis would kill her in her 20’s is amazing. Just goes to show that one can never live (or die) by what a medical professional tells you. As both you and Paul have written about, it’s important to have a strong support network, live healthfully, get the best medical care possible, and maintain hope. Thanks to both of your for your wisdom!! Always, Joan