EXPLAINER: Lab results and their interpretation

Hi Thomas
Thanks alot. This group has given me alot of inspiration and foresight.
My friend has connected me to an oncologist who says I have to take a biopsy next week before she can confirm anything.I pray all goes well otherwise living my 5years and 18 months old children cannot be celebrated. My wife is very down and I really pray for her strength.
Kinoti

I’m sorry to hear Knoti- I also appreciate your involvement and support you have shown others on this forum. I hope you receive some good news , we are here to support you.

Hi albasil808
Thanks a lot for giving a part my back. I happy to have friends like.
I am also delighted to hear that my little contribution in our community has never in appreciated.

Kudos you have lifted my spirits.
Kinoti

Kinoti, my thoughts are with you in this trying time. It’s not easy to feel like this. What wasn’t expected

Hello my brother,
I am just reading this… I can only wish you well. The most important thing is that there is only soo much we can control.

May you please consider a second test just to be sure of things?.
Regards

ThomasTu and other experts, another question sorry to be swamping you! ALAT and Asat are constantly on the rise despite Tenofovir, they recently reached their highest at 3 and 2 times the norm respectively. Y-gt is rising as well although it is still in the norm but there is a clear tendency. My doctor isn’t worried and I feel he thinks I am overreacting and expecting too much. I am on Tenofovir for 10 months and the viral load was not detected after 2 months of starting the medication (maybe earlier but we tested two months after the beninning of therapy). Clearly it is not hep b that is causing liver damage. What can I do? How can I convince him to start testing? Or is it best to wait? Thank you!

Thanks alot.
I have connected with an oncologist and she recommended I do a biopsy which I will tomorrow.
Those who are believers, kindly continue mentioning me to your creator.
Kinoti.

Thanks alot for Your swift response. I’m glad my body is able to fight this virus, I hope I’m able to get rid of the virus totally. On that note, do you think just liver supplements is what I need this time or some extra stronger treatment would be better?

Thanks for the links too, the discomfort on the upper right side of my belly is just persistent. I hope it can just stop. I always feel like there is a bug on that side. Though, it causes no pain, but it’s weird too.
Also, what could have cause the pain at my knee joints?
I just wish I can get answers to my worries

Tsbs
Thanks for your comforting words. I must admit that I haven’t slept well for some days. I am unable to look at my children and make funs with them.
But, I am healing but by bit.
Kinoti.

I hope the 2nd opinion will be better. For almost a month since my diagnosis of fatty liver grade 3 coupled with CHB, I haven’t been sleeping well too. I live in constant dread of death because each day my symptoms is getting worse. Couldn’t even tell my wife the truth. I told her I have no symptoms. Dreading what my biopsy result will be.

Hello Kinoti.
I’m really sad to hear your news, and inspired by how positive you are. I am praying for you and family.
Thank you for you encouraging engagement in this group.
Remember we are here if we can help.

Hi caraline
I am comforted by your kind words. Thanks for your prayers.
It’s a hard place to be but life must go on.
I will keep our community posted on all my developments and hope to continue encouraging others even if sharing my experience will alleviate somebody.
I am emotionally healing very fast. I sat my wife down and we have weighed alot of options.
We have also agreed on the life of her family in case I exit.
Keep encouraged.
Kinoti
Kinoti

Hello Tsbs
I don’t know your story but I had fatty liver, mild. Changed my diet to cut out lots of rubbish, sugar, processed food, food with too many ingredients. Just simple fresh food. Not much red meat. Exercise, less stress, fresh air, good sleep, no alcohol, drugs tobacco.
And now I don’t have fatty liver. So the liver can repair. I am on treatment, Entercavir. But I got fatty liver after being on treatment a few years.
I hope your biopsy has a good result. Keep us updated.

Hi Tsbs,
I do hope you are still strong and focused.Live each day as it comes.
I am very expectant on the results of your biopsy.please keep us posted even as we keep our hearts together in praying for each other.
Kinoti

@ kinoti, I am hopeful. I hope you have done the biopsy?

Hello everyone, discovered I have HBV last week, it’s been a rollercoaster of emotions, I’ve done tons of tests and ultrasounds but a lot of things are still confusing to me, so I need help in better understanding the outlook:

My HBV genotype isn’t. A,B,C or D, don’t know the significance of that but the 4 the lab tested for came out negative

Cholesterol General - 6.24 result indicated it’s higher than the 5.2 limit
ACT - 47.5
ALT - 65
I had to go for further testing when my ALT levels came out high that was how HepB was discovered initially.

Every other thing I didn’t include from the blood count was within range, but I included all the results for the tests done for hbv

Thank you for sharing your story and sorry you’ve been so confused about the lab results. Please consider reading this post : EXPLAINER: Lab results and their interpretation.

Your HBV DNA titre is relatively low, and you are HBeAg-negative. Your fibroscan shows little to no liver fibrosis. These are all consistent with good clinical outcomes. It is also associated with low (but not zero) risk for transmission. 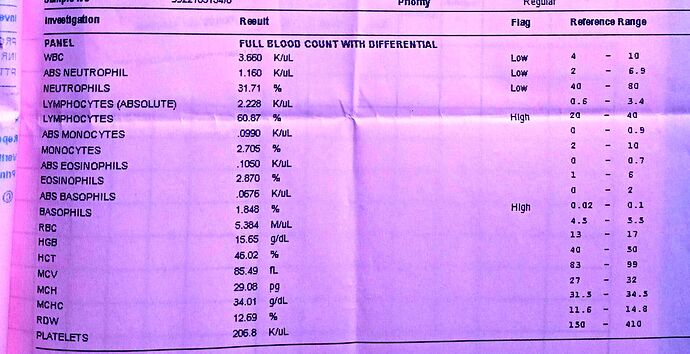 Document 14_1272×2612 52.4 KB
I have gone through another fibro scan and blood test just within three months, and here are the results. Fibro scan score 6 while the previous one was 12.2
Due to the high ALT my Dr suggested to start medication. I am now in tenofovir about three weeks now. I was feeling much pain but now has reduced a little bit though not completely. Please advise accordingly
availlant 14 September 2022 14:08 #543

Youe reduction in your Fibroscan result is large enough that it means real reduction in inflammation. It may also relect reversal of any fibrosis you may have. It now sits in the normal range. This is good news but it will be good to confirm with another Fibroscan in 6-12 months.

Im glad that you are feeling better and have started TDF. Everything is looking good so far.